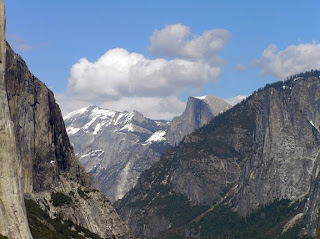 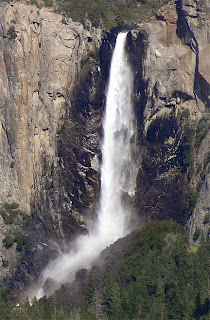 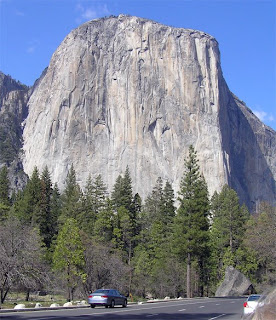 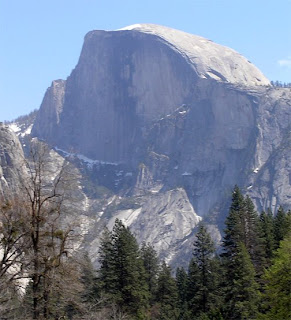 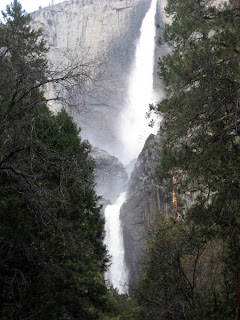 Yosemite National Park – it is so stunning, what else is there to say about it? Well, for one thing, it was arguably the inspiration for the whole National Park system; for another, it was the first piece of America set aside for preservation for posterity . . . in 1864, by Congress and President Lincoln . . . right in the midst of the Civil War!

For another, it was unfortunately named . . . Yosemite is the English transliteration of a Miwok Indian word meaning "They are killers!" referring to the Ahwahneechee Indians who lived in Yosemite Valley. The other suggested name was Ahwahnee, which is what the Miwok called it, no violent meaning attached.

All that aside, the view as you enter the valley is breath-taking (see the first picture) – a panorama of granite and waterfalls. The waterfalls were running strongly when we arrived, due to a heavy snowpack over the winter. The second picture shows Ribbon Falls in the valley, just to the left of El Capitan.

El Capitan stands some 3300 feet above the floor of the valley (thus about 7500 feet above sea level) and is the Mecca for rock climbers. There is a sometime contest to set the record for the fastest climb up those 3300 feet – it's less than 8 hours, I believe, although many climbers spend four or five days (and nights) on its face getting to the top.

Then, of course, there is Half Dome, named because it appears to have been split in two, although the other half is nowhere to be found. The last picture shows the Upper and Lower Yosemite Falls, at another location in the valley.

The geologic history of the valley, of molten lava, tectonic plate shifts, millions of years in the formation of granite cliffs, is so much more interesting than any possible "Creation" scenario that one could never settle for anything other than that story. Non-believers (in evolution and "natural" history) apparently do not come to Yosemite . . .
Posted by The Adventures of Glenn & Clara at 4:31 PM 1 comment: 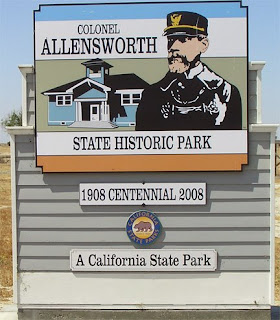 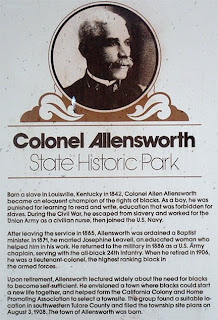 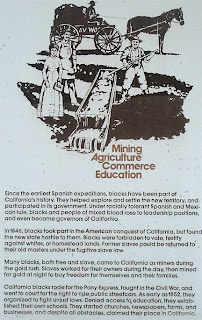 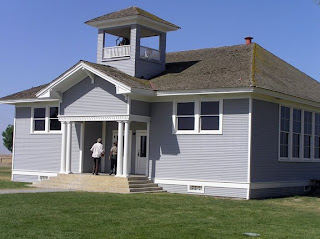 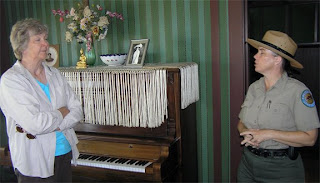 One of the more interesting stops on our trip was at Col. Allensworth State Historic Park, a few miles above Wasco, CA, originally intended as just an overnight stop for us as we traveled between Bakersfield and Yosemite (4/26/09).

It's really quite an interesting story, most of which you can read on the second and third pictures. This park commemorates the town of Allensworth, CA, built in 1908 to provide African-Americans an opportunity to achieve self-reliance and success in their own community. Unfortunately, it survived and thrived for only about ten years because its water supply suddenly disappeared, taken largely by nearby farming enterprises, and a series of failed promises to protect it.

The first place we were in in the town was the town library, originally the town school (number two, it first met in someone's home) but converted to the library when a shiny new school was built in 1912 (see picture #4). Obviously education was a very high priority in the community, second to none.

The California State Park system has done a very good job restoring many of the original buildings, making a nice campground for visitors and providing a full-time ranger for tours and so forth. Here she is with Clara for our personal tour – on a Sunday morning at 9 a.m. no less.

Perhaps the most intriguing facet of the park is its anonymity among California residents – we haven't yet spoken to one who has ever heard of this historic place, even some who have lived in that area for more than 40 years!
Posted by The Adventures of Glenn & Clara at 4:26 PM 1 comment:

Happy Anniversary To Us!! 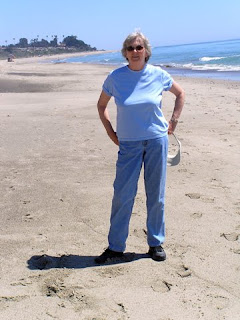 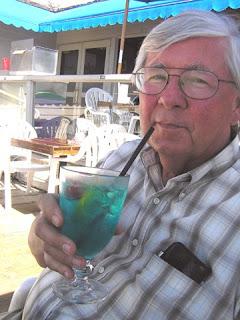 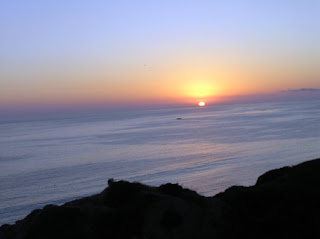 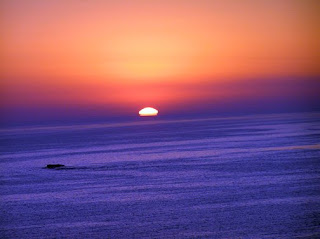 Before we left Seattle last February, Clara had said that one place she wanted to go for sure was San Clemente State Beach in California. We have been there perhaps three times over the last dozen years and always enjoyed our time there.

So it was that on Tuesday, April 21st, we were there to celebrate our 52nd wedding anniversary. The campground sits on a high bluff overlooking the Pacific Ocean, and we had managed to get a spot right on the edge (see first picture.) In mid-afternoon we walked up the beach to the pier for drinks, appetizers and munchies at Fisherman's Bar and Grill. Although it doesn't look that far in the picture, the pier is about a mile and a half away – a healthy walk on a very warm day.

I was pleased to enjoy my favorite San Clemente drink, called a "Boneyard," while Clara started out with a split of champagne, all accompanied by a platter of calamari strips.

Later, we had their Happy Hour special – BBQ ribs, baked beans, coleslaw – as well as a "Cottons" (supposedly named in honor of Richard Nixon whose Summer White House was in San Clemente, but we haven't figured out the reference in the name.)

We spent a couple hours eating, drinking and asking each other questions starting off with "Did you ever imagine 52 years ago that you would be . . . "

We took a bus back to the campground (let's not overdo the healthy walking) and enjoyed a most beautiful sunset.
Posted by The Adventures of Glenn & Clara at 4:21 PM No comments: 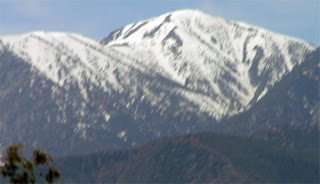 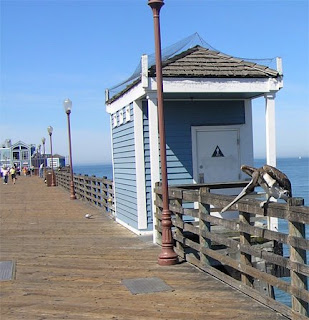 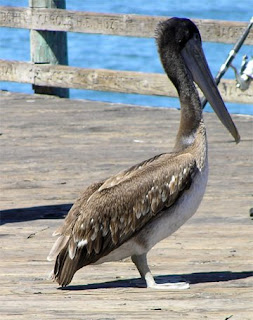 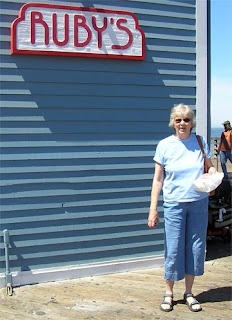 On our way from Hole-in-the-Wall to San Clemente, we went through El Cajon Pass in the San Bernardino Mountains – it was amazing to see all of the snow there, on April 19th, with temperatures in Victorville and LA in the 70's.

Our first outing in the San Clemente area took us down to Oceanside Pier, where we visited the neighborhood pelican and had breakfast at Ruby's, a favorite haunt of Clara's, located out at the end of the pier. On the recommendation of a friend, Clara had the "French Toast Special" – special because the "French Toast" was actually slices of Cinnamon roll!

Whenever I see a pelican (which ain't often in Seattle . . . ) I always remember the lines from Ogden Nash . . . A marvelous bird is the pelican . . His beak can hold more than his belly can!
Posted by The Adventures of Glenn & Clara at 4:16 PM No comments:

To be edited later
Posted by The Adventures of Glenn & Clara at 4:13 PM No comments:

To be edited later
Posted by The Adventures of Glenn & Clara at 4:13 PM No comments:

To be edited later
Posted by The Adventures of Glenn & Clara at 4:12 PM No comments:

To be edited later
Posted by The Adventures of Glenn & Clara at 4:11 PM No comments: 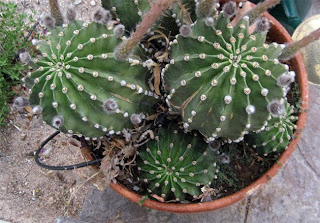 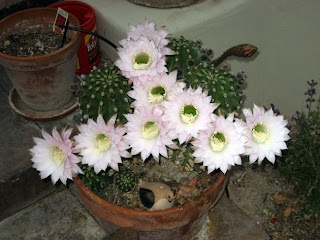 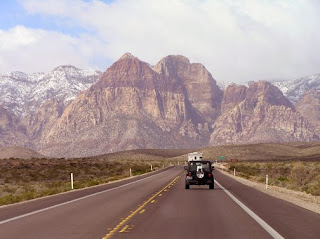 On Wednesday morning, as we prepared to leave for a visit to Death Valley, Linda, out in the back yard, exclaimed in delight "Come see this!"

Overnight, one of her plain-Jane cactuses in the backyard had suddenly sprouted a bunch of gorgeous blooms – another example of how those ugly and threatening plants exhibit their own special beauty.

Later, as we drove southwest out of town, in our caravan (Linda & Jerry's camper and Jerry's Jeep and us) we remarked again on the paradox of Las Vegas – snow up on Mt. Charleston with above 70's temps in town. We also noted why Red Rock Canyon got its name . . .

As we got up just a little higher on our way out to Pahrump, the snow actually came right down to the edge of the road.
Posted by The Adventures of Glenn & Clara at 4:06 PM No comments: 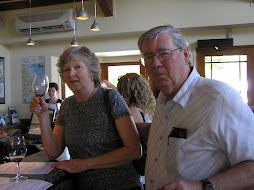